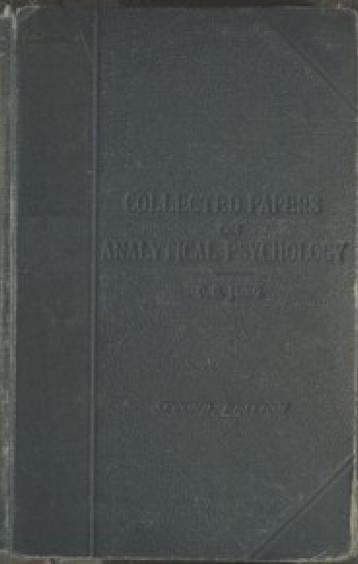 The following papers have been gathered together from various sources, and are now available for the first time to English readers. The subject of psychoanalysis is much in evidence, and is likely to occupy still more attention in the near future, as the psychological content of the psychoses and neuroses is more generally appreciated and understood. It is of importance, therefore, that the fundamental writings of both the Viennese and Zürich Schools should be accessible for study. Several of Freud's works have already been translated into English. Dr. Jung's "Wandlungen und Symbole der Libido" was published in America in 1916 under the title of "The Psychology of the Unconscious." That work, read in conjunction with these papers, offers a fairly complete picture of the scientific and philosophic standpoint of the leader of the Zürich School. It is the task of the future to judge and expand the findings of both schools, and to work at the development of the new psychology, which is still in its infancy.

It will be a relief to many students of the unconscious to see it in another aspect than that of "a wild beast couched, waiting its hour to spring." Some readers have gathered that view of it from the writings of the Viennese School, a view which is at most that dangerous thing "a half-truth."

In the papers appearing for the first time in this edition (Chapters XIV. and XV.), Dr. Jung develops his ideas of introversion and extroversion, a contribution of the first importance to psychology. He agrees with Freud in regarding the neuroses to be the result of repression, but differs in his view as to the origin of repression. He finds this to lie[vi] not in sexuality per se, but rather in man's natural tendency to adapt to the demands of life one-sidedly, according to his type of mentality. The born extrovert adapts by means of feeling, thought being under repression and relatively infantile. The introvert's natural adaptation is by means of thought; feeling being more or less repressed remains undeveloped. In either type the neglected co-function is behind the adapted function. This inequality operating in the unconscious, brings about a conflict, which in certain subjects amounts to a neurosis, and in others produces a limitation of individual development. This view shifts the interpretation of repression on to a much more comprehensive basis than that of sexuality, although there can scarcely be a repression that does not include this instinct on account of its deep and far-reaching importance in man.

There is no doubt that some even scientific persons have a certain fear of whither the study of the unconscious may lead. These fearful persons should be reminded that they possess an unconscious in spite of themselves, and that they share it in common with every human being. It is an extension of the individual. To study it is to deepen the self. All new discoveries have at one stage been called dangerous, and all new philosophies have been deemed heresies. It is as though we would once more consign radium to its dust-heaps, lest some day the new radiancy should over-power mankind. Indeed this particular thing has proved at once most dangerous and most precious. Man must learn to use his treasure, and in using it to submit to its own laws, which can only become known when it is handled and investigated.

Those who read this book with the attention it requires, will find they gain an impression of many new truths. The second edition is issued towards the end of the third year of the Great European war, at a time when much we have valued and held sacred is in the melting-pot. But we believe that out of the crucible new forms will arise. The study of psychoanalysis produces something of the effect of a war in the psyche; indeed, we need to make conscious this war in the[vii] inner things of the mind and soul if we would be delivered in the future from war in the external world. There is a parallelism between individual and international neurosis. In the pain of the upheaval, one recognises the birth-pangs of newer, and let us hope, truer thought, and more natural adaptations. We need a renewal of our philosophy of life to replace much that has perished in the general cataclysm, and it is because I see in the analytical psychology, which grows out of a scientific study of the unconscious, the germs of such a new construction, that I have gathered the following essays together. The translation is the work of various hands, the names of the different translators being given in a footnote at the beginning of each essay; for the editing I am responsible. The essays are, as far as possible, printed in chronological order, and those readers who are sufficiently interested will be able to discern in them the gradual development of Dr. Jung's present position in psychoanalysis.