Instincts of the Herd in Peace and War 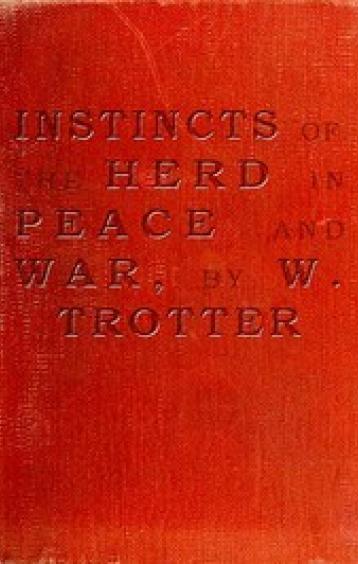 Instincts of the Herd in Peace and War

The first two essays in this book were written some ten years ago and published in the Sociological Review in 1908 and 1909. They had formed a single paper, but it was found necessary to publish in two instalments at an interval of six months, and to cut down to a considerable extent the total bulk.

It was lately suggested to me that as the numbers of the review in which the two essays appeared were out of print, the fact that the subject concerned was not without some current interest might justify a republication. It was not possible to do this without trying to embody such fruits as there might be of ten years’ further speculation and some attempt to apply to present affairs the principles which had been sketched out.

The new comment very soon surpassed by far in bulk the original text, and constitutes, in fact, all but a comparatively few pages of this book. This rather minute record is made here not because it has any interest of its own, but especially to point out that I have been engaged in trying to apply to the affairs of to-day principles which had taken shape ten years ago. I point this out not in order to claim any gift of foresight in having suggested so long ago reasons for regarding the stability of civilization as unsuspectedly slight, but because it is notorious that the atmosphere of a great war is unfavourable to free speculation. If the principles upon which my argument is based had been evolved during the present times, the reader would have had special reason to suspect their validity, however plausible they might seem in the refracting air of national emergency.

The general purpose of this book is to suggest that the science of psychology is not the mass of dreary and indefinite generalities of which it sometimes perhaps seems to be made up; to suggest that, especially when studied in relation to other branches of biology, it is capable of becoming a guide in the actual affairs of life and of giving an understanding of the human mind such as may enable us in a practical and useful way to foretell some of the course of human behaviour. The present state of public affairs gives an excellent chance for testing the truth of this suggestion, and adds to the interest of the experiment the strong incentive of an urgent national peril.

If this war is becoming, as it obviously is, daily more and more completely a contest of moral forces, some really deep understanding of the nature and sources of national morale must be at least as important a source of strength as the technical knowledge of the military engineer and the maker of cannon. One is apt to suppose that the chief function of a sound morale is the maintenance of a high courage and resolution through the ups and downs of warfare. In a nation whose actual independence and existence are threatened from without such qualities may be taken for granted and may be present when the general moral forces are seriously disordered. A satisfactory morale gives something much more difficult to attain. It gives smoothness of working, energy and enterprise to the whole national machine, while from the individual it ensures the maximal outflow of effort with a minimal interference from such egoistic passions as anxiety, impatience, and discontent. A practical psychology would define these functions and indicate means by which they are to be called into activity.

The more we consider the conduct of government in warfare the clearer does it become that every act of authority produces effects in two distinct fields—that of its primary function as directed more or less immediately against the enemy, and that of its secondary action upon the morale of the nation. The first of these two constituents possesses the uncertainty of all military enterprises, and its success or failure cannot be foretold; the influence of the second constituent is susceptible of definition and foresight and need never be wholly ambiguous to any but the ignorant or the indifferent.

The relative importance of the military and the moral factors in any act or enterprise varies much, but it may be asserted that while the moral factor may sometimes be enormously the more important, it is never wholly absent. This constant and admittedly significant factor in all acts of government is usually awarded an attention so thoroughly inexpert and perfunctory, as to justify the feeling that the customary belief in its importance is no more than a conventional expression.

The method I have used is frankly speculative, and I make no apology for it because the facts are open to the observation of all and available for confirmation or disproof. I have tried to point out a way; I have tried not to exhort or persuade to the use of it—these are matters outside my province.