Culture and Cooking Art in the Kitchen 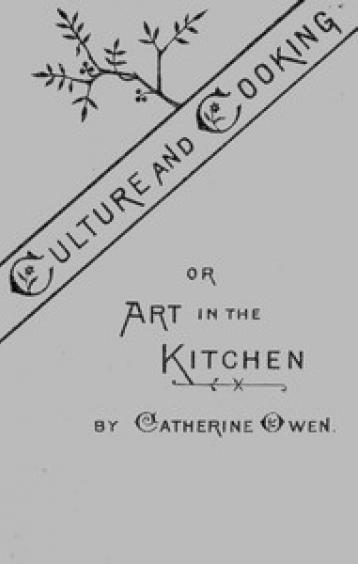 Culture and Cooking Art in the Kitchen

This is not a cookery book. It makes no attempt to replace a good one; it is rather an effort to fill up the gap between you and your household oracle, whether she be one of those exasperating old friends who maddened our mother with their vagueness, or the newer and better lights of our own generation, the latest and best of all being a lady as well known for her novels as for her works on domestic economy—one more proof, if proof were needed, of the truth I endeavor to set forth—if somewhat tediously forgive me—in this little book: that cooking and cultivation are by no means antagonistic. Who does not remember with affectionate admiration Charlotte Bronté taking the eyes out of the potatoes stealthily, for fear of hurting the feelings of her purblind old servant; or Margaret Fuller shelling peas?

The chief difficulty, I fancy, with women trying recipes is, that they fail and know not why they fail, and so become discouraged, and this is where I hope to step in. But although this is not a cookery book, insomuch as it does not deal chiefly with recipes, I shall yet give a few; but only when they are, or I believe them to be, better than those in general use, or good things little known, or supposed to belong to the domain of a French chef, of which I have introduced a good many. Should I succeed in making things that were obscure before clear to a few women, I shall be as proud as was Mme. de Genlis when she boasts in her Memoirs that she has taught six new dishes to a German housewife. Six new dishes! When Brillat-Savarin says: "He who has invented one new dish has done more for the pleasure of mankind than he who has discovered a star."