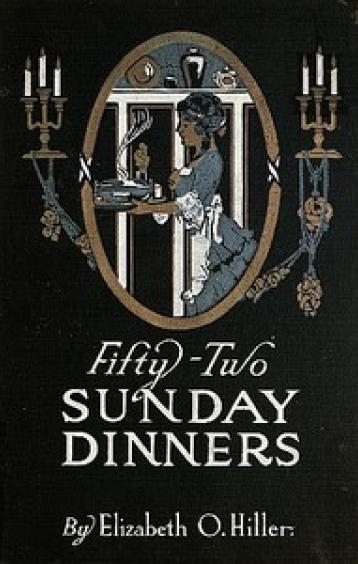 To the modern wide-awake, twentieth-century woman efficiency in household matters is quite as much a problem as efficiency in business is to the captains of industry.

How to make pure food, better food and to economize on the cost of same is just now taxing the attention and ingenuity of domestic science teachers and food experts generally. The average housewife is intensely interested in the result of these findings, and must keep in touch with them to keep up with the times and run her home in an intelligent and economical as well as healthful routine.

The eternal feminine question is, "What shall we have for dinner to-day?" It is not always the easiest thing in the world to think of a seasonable menu, nor to determine just the right combination that will furnish a meal appetizing and well-balanced in food values. Furthermore, both the expense and the amount of work entailed in preparation must be considered.

This Cook Book is especially designed to meet just that pressing daily need of the housewife. It presents for her guidance a menu for every Sunday dinner in the year; it suggests dishes which are seasonable as well as practical; it tells in a simple, intelligent manner just how these dishes can be made in the most wholesome and economical form; and the recipes have all been especially made for this book and tested by that eminent expert, Mrs. Elizabeth O. Hiller.

The title of "52 Sunday Dinners" has been given the book because Sunday dinners as a rule are a little more elaborate than the other dinners of the week, but from these menus may be gleaned helpful hints for daily use.

While climatic conditions differ somewhat in various sections of the country, we have tried to approximate the general average, so that the suggestions might be as valuable to the housewife in New England as to the housewife in the West or South, or vice versa.

Simplicity, economy and wholesomeness have been given preferred attention in the preparation of these recipes, many of which are here presented for the first time.

In the interest of health and economy a number of the recipes suggest the use of Cottolene—a frying and shortening medium of unquestioned purity—in place of butter or lard. Cottolene is a vegetable shortening, pure in source and manufactured amid cleanly favorable surroundings. It is no new, untried experiment, having been used by domestic science experts and thousands of housewives for nearly twenty years; to them Cottolene for shortening and frying is "equal to butter at half the price, better and more healthful than lard—and more economical than either." We, therefore, offer no apologies for the small proportion of recipes specifying the use of Cottolene, and suggest that a trial will convince any housewife that Cottolene makes better food than either butter or lard, and is preferable from the standpoints of efficiency, economy and healthfulness.

We commend this book to your critical inspection and test, believing you will find it convenient, helpful, unique and pointing the way to better and more economical living.