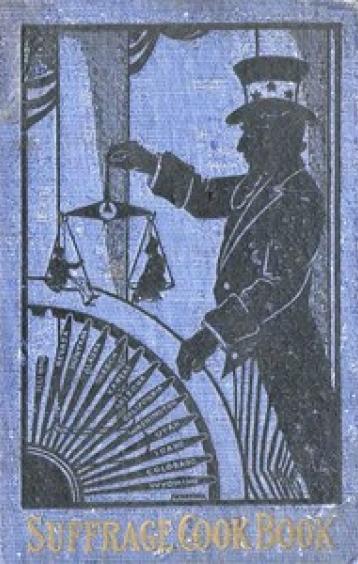 There are cook books and cook books, and their generation is not ended; a generation that began in the Garden of Eden, presumably, for if Mother Eve was not vastly different from her daughters she knew how to cook some things better than her neighbors, and they wanted to know how she made them and she wanted to tell them.

Indeed, it has been stated that the very first book printed, a small affair, consisted mainly of recipes for "messes" of food, and for remedies for diseases common in growing families.

Whether the very first book printed was a cook book or not, it is quite true that among the very oldest books extant are those telling how to prepare food, clothing and medicine. Some of these make mighty interesting reading, particularly the portions relating to cures for all sorts of ills, likewise of love when it seemed an ill, and of ill luck.

And who wouldn't cheerfully pay money, even in this enlightened day, for a book containing recipes for just these same things? For in spite of our higher civilization, broader education, and vastly extended knowledge, we still believe in lucky days, lucky stones, and lucky omens.

These formed no inconsiderable part of the old time cook book, and no doubt would constitute a very attractive feature of a modern culinary guide. However, hardly anyone would confess to having bought it on that account.

In these later times professors of the culinary art tell us the cooking has been reduced to a science, and that there is no more guess work about it. They have given high sounding names to the food elements, figured out perfectly balanced rations, and adjusted foods to all conditions of health, or ill health. And yet the world is eating practically the same old things, and in the same old way, the difference being confined mainly to the sauces added to please the taste.

Now that women are coming into their own, and being sincerely interested in the welfare of the race, it is entirely proper that they should prescribe the food, balance the ration, and tell how it should be prepared and served.

Seeing that a large majority of the sickness that plagues the land is due to improper feeding, and can be prevented by teaching the simple art of cooking, of serving and of eating, the wonder is that more attention has not been given to instruction in the simpler phases of the culinary art.

It is far from being certain that famous chefs have contributed greatly to the health and long life of those able to pay the fine salaries they demand. Nor are these sent to minister to the sick, nor to the working people, nor to the poor. It would seem that even since before the time of Lucullus their business has been mainly to invent and concoct dishes that would appeal to perverted tastes and abnormal appetites.

The simple life promises most in this earthly stage of our existence, for as we eat so we live, and as we live so we die, and after death the judgment on our lives. Thus it is that our spiritual lives are more or less directly influenced by our feeding habits.

Eating and drinking are so essential to our living and to our usefulness, and so directly involved with our future state, that these must be classed with our sacred duties. Hence the necessity for so educating the children that they will know how to live, and how to develop into hale, hearty and wholesome men and women, thus insuring the best possible social and political conditions for the people of this country.

"The surest way into the affections of a man is through his stomach, also to his pocket," is an ancient joke, and yet not all a joke, there being several grains of truth in it, enough at least to warrant some thoughtful attention.

Women being the homekeepers, and the natural guardians of the children, it is important that they be made familiar with the culinary art so they may be entirely competent to lead coming generations in the paths of health and happiness.

So say the members of Equal Franchise Associations throughout the length and breadth of our land, and beyond the border as far as true civilization extends.

Hence this book which represents an honest effort to benefit the people, old and young, native and foreign. It is not a speculative venture but a dependable guide to a most desirable social, moral and physical state of being.

Disguise it as we may the fact remains that the feeding of a people is of first importance, seeing the feeding is the great essential to success, either social or commercial. The farmer and stock raiser gives special attention to feeding, usually more to the feeding of his animals than of his children, or of himself. And yet he wonders why his domestic affairs do not thrive and prosper as does his farming and stock raising.

Physical trainers are most particular about what the members of their classes eat and drink. One mess of strawberry short cake and cream will unfit a boy for a field contest for a whole week, while a full meal of dainties may completely upset a man or woman for a day or two.

The cook book of the past was filled mainly with recipes for dainties rather than sane and wholesome dishes; the aim being to please the taste for the moment rather than to feed the body and the brain.

Now that we are entering upon an age of sane living it is important that the home makers should be impressed with the fact that good health precedes all that is worth while in life, and that it starts in the kitchen; that the dining room is a greater social factor than the drawing room.

In the broader view of the social world that is dawning upon us the cook book that tells us how to live right and well will largely supplant Shakespeare, Browning, and the lurid literature of the day.